A romantic comedy adventure... Multimillionaire corporate head and heiress to a wine empire, Renée Cartier is used to being the woman in charge, with everyone jumping at her command. That is, until she has a run-in with the most insufferable man she’s ever met, Logan Dunn, the director of a school that she sponsors. She can’t wait to use her power to make his life miserable until, much to her chagrin, she falls into his trap, accepting his dare, which puts her under his control, answering to him, for a whole week. It ends up that this is the most eventful…and petrifying…week of her life. But it is also during this short week that she falls under Logan’s spell, realizing that he’s the man she’s been searching for, all her life. Logan can’t wait to get revenge on the snooty diva who tries to get him fired. He devises a plan to get her under his control, with every intention of making her suffer the whole time she’s forced to work for him. At first he succeeds, but then the wily woman surprises him by surviving his challenge. When she turns the tables on him he soon finds that he’s the one fighting to survive. He’s in danger of losing, not just his dignity, but also his heart. Comedy, conflict and romance – a tantalizing triad for those who love an entertaining romantic adventure.


Click on the link:
TAMING THE FURY
Posted by Judy Angelo at 09:10 19 comments:
Email ThisBlogThis!Share to TwitterShare to FacebookShare to Pinterest

Celebrating the Holidays with Romance

For my readers in the U.S.A., I hope you had a wonderful Thanksgiving Holiday.  For my readers from outside of the U.S.A., I hope you thoroughly enjoyed the weekend, whether you were working hard, you were busy running errands, or you were simply relaxing at home.
It's been a while since my last book but I'm happy to let you know that I just started a brand new story, 'Taming the Fury', a fast-paced, lighthearted read.  I'm having lots of fun with it.  In fact, I'm flowing so well that I'll have my new story ready for you in time for Christmas.  It's going to be spicy - the name says it all.
In the meanwhile, my holiday collection, Home for the Holidays, is now on special for only $2.99 (a $6.97 value).  It's free for Kindle Unlimited members.
Just click on the link below -
Amazon:  Home for the Holidays
I hope these stories will put you in a happy holiday mood.
All the best,
Judy
Posted by Judy Angelo at 21:08 4 comments:
Email ThisBlogThis!Share to TwitterShare to FacebookShare to Pinterest

Do you love to listen to audio books?  It's a great way to read while jogging, driving, doing the dishes, etc.

Satisfy your listening pleasure with the audio version of 'Tamed by the Billionaire' from iTunes, Audible and Amazon - now available. 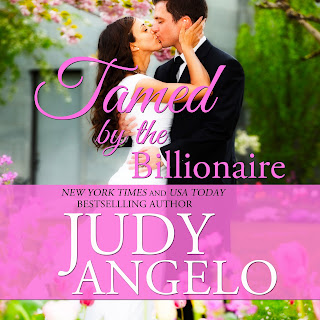 And look out for the audio version of 'Maid in the U.S.A.' - available by August 25. 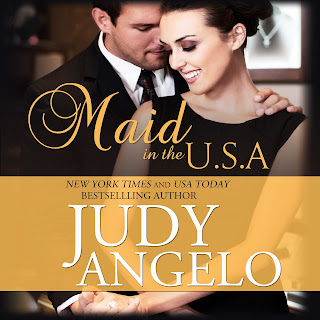 Happy listening!
Posted by Judy Angelo at 07:32 69 comments:
Email ThisBlogThis!Share to TwitterShare to FacebookShare to Pinterest

Eva and the Extreme Executive - now in stores!

"Sergio Castillo is the most infuriating man, ever!

That's the opinion Eva Santiago holds of the adventurous, risk-taking tycoon who is determined to pursue her...despite the fact that she's made it very clear that she's not at all interested.

But Sergio Castillo is not one to take no for an answer. She learns that soon enough. And so, although he represents everything she fears, she soon finds herself falling under his spell...until she realizes that, no matter how much she wishes it, a leopard can never change his spots.

Constant conflict at every turn. Can Eva hope to ever tame her extremely adventurous executive?" 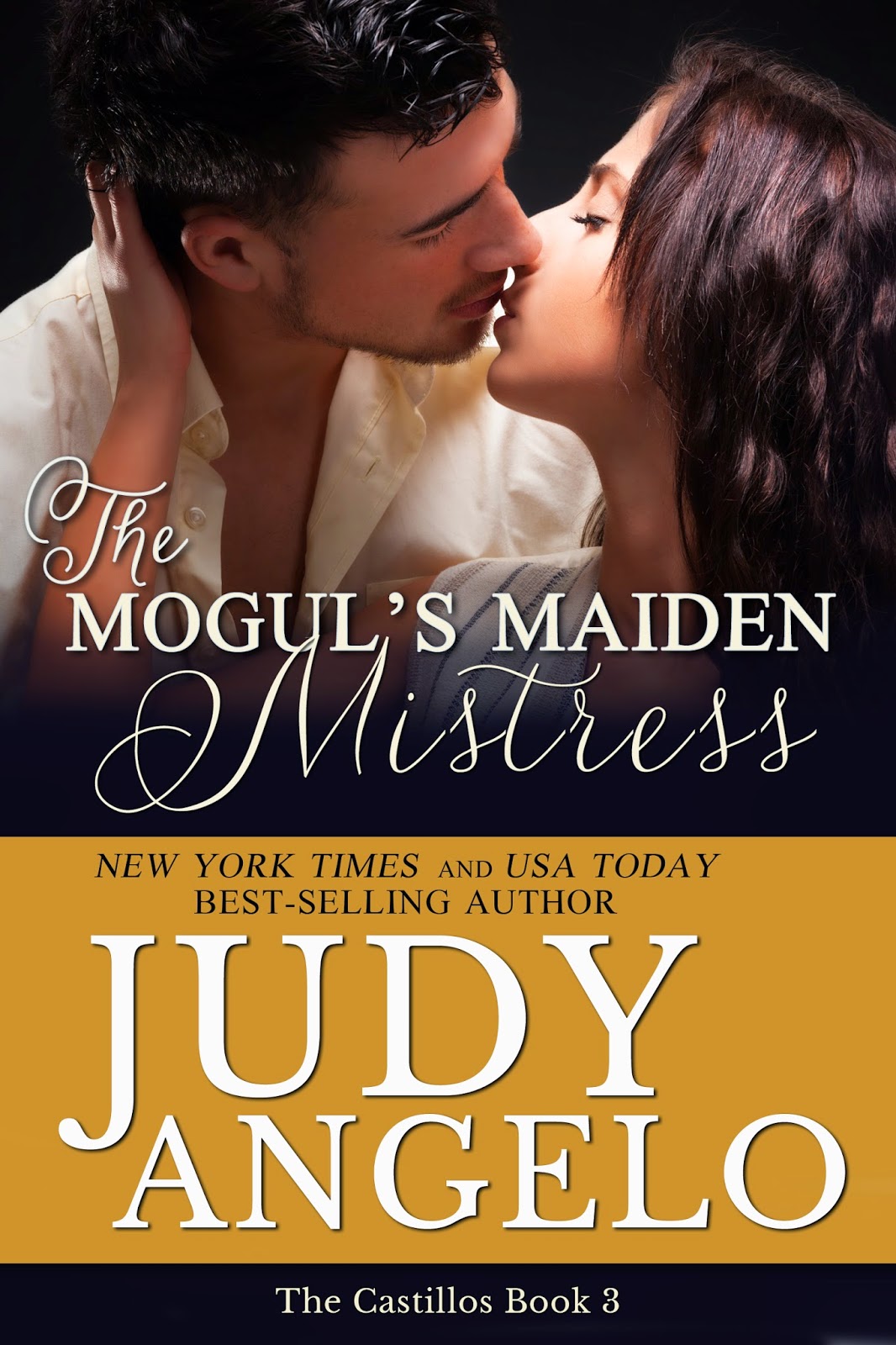 As we approach the close of April, I hope the month has been a productive one for you.  If not, don't give up hope.  We still have a couple of days left, so get cracking!
I'm happy to say that my month has been productive because I completed Book 3 in The Castillos series.  Yaay!
Please check out Enrique's story in 'The Mogul's Maiden Mistress', a sweet story of innocence and exploration (with a touch of spice).  What's a romantic story without some sugar and spice, right?
Read the story summary below.  Get to know Melissa and Enrique.  Fall in love with them, like I did.  They're waiting to meet you.
The Mogul's Maiden Mistress is now available from:
Amazon:  The Mogul's Maiden Mistress
Apple:  The Mogul's Maiden Mistress
B & N:  The Mogul's Maiden Mistress
Kobo:  The Mogul's Maiden Mistress
Scribd:  The Mogul's Maiden Mistress
Just click on the book title to get to the book page.
THE MOGUL'S MAIDEN MISTRESS
From the first time he meets his grandfather’s private nurse, Enrique Castillo is intrigued.  Melissa Morales seems shy and withdrawn, but this mild-mannered maiden has an underlying current of subtle strength that draws him in until she’s got him in an unrelenting grip that has him coming back for more.  When this guileless girl puts herself in his hands, trusting him to teach her the ways of the world, he is soon smitten.  Unschooled though she is, what better woman to play the role of his mistress?
Melissa Morales has always prided herself on being practical and realistic.  She knows her place in the world and has no illusions of grandeur.  But when the grandson of her employer invites her to play the role of his mistress, it is an offer she can’t refuse.  And then, to her astonishment, he agrees to teach her what it means to be a woman.  What could be better than that?
But Melissa soon learns that she’s playing a game she can never win.  What a wicked way to learn the dangers of falling in love.​

Wishing you a satisfying close to April.
All the best to you!
Judy
Posted by Judy Angelo at 09:45 1 comment:
Email ThisBlogThis!Share to TwitterShare to FacebookShare to Pinterest Julio Castillo is incorrigible!  Smooth, suave and egotistical, he's a danger to any woman who comes within viewing distance.  Lady killer?  That's an understatement.  And it doesn't help that he's a Castillo.  Known for their bold and dominant nature, they never know when to take 'no' for an answer.

But when Julio decides he wants his old flame back he finds that the tables are turned and he's the one fighting for a foothold.  Maya Malone, once reserved and easy-going, has blossomed into a determined woman who knows how to take control.  And, before Julio knows what's happening, she's the one in charge.

This time, it's the fairer sex that's calling the shots!


Look out for Training the Tycoon for Valentine's Day.
Posted by Judy Angelo at 11:14 1 comment:
Email ThisBlogThis!Share to TwitterShare to FacebookShare to Pinterest 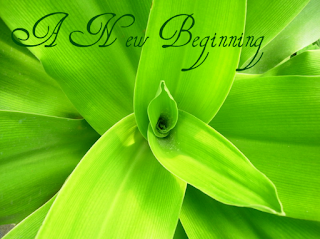 It's a new year, a new day, a new moment in life.  Let's resolve to be happy, present, and in the moment.  Value each precious moment of life, live fully,and be at peace.

Wishing for you, a wonderful year!
Posted by Judy Angelo at 02:46 1 comment:
Email ThisBlogThis!Share to TwitterShare to FacebookShare to Pinterest
Newer Posts Older Posts Home
Subscribe to: Posts (Atom)