I'll select a novel each week and post a free chapter for you.  I hope you enjoy this story.  Here you go: 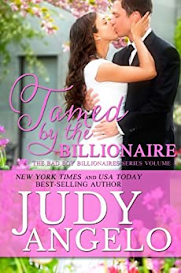 TAMED BY THE BILLIONAIRE

Volume 1 - Tamed by the Billionaire

Volume 5 - To Tame a Tycoon

Volume 11 - So Much Trouble When She Walked In

Book 1 - The Billionaire Next Door

Book 2 - Babies for the Billionaire

Book 1 - Beauty and the Beastly Billionaire

Book 4 – Eva and the Extreme Executive

Rome for the Holidays (Novella)

The NAUGHTY AND NICE Series

TAMED BY THE BILLIONAIRE

THE TAMING OF A PRINCESS...

Serena Van Buren, the privileged daughter of a wealthy businessman, can't wait to begin her three-month tour of Europe with her college mates. Little does she know that fate has other plans in store!

Instead of dancing with handsome Italians and dining with charming Frenchmen Serena finds herself trapped in a six-month internship with overbearing business tycoon, Roman Steele - an arrangement orchestrated by her own father.

Serena is determined to show Roman that she won't yield to the demands of any man, boss or no boss. She's a Van Buren, after all, known to wither a man with one look. But Roman Steele is like no man she's ever met before. Suave, sexy and stunningly handsome, there's something about him that she can't resist. It looks like Serena Van Buren has finally met her match.

A sweet and saucy romance that will have you smiling...

Roman Steele stared across the boardroom table at his long-time business associate.  “So basically you’re telling me she’s a spoiled brat.”
The older man frowned.  “Since you put it so bluntly…yes, I guess that’s what I’m saying.”  Richard Van Buren laced his fingers across his stomach and leaned back in the chair.  “She’s getting me worried, Roman.  She’s all grown up now.  She can’t keep behaving like this.”
“Don’t you think you’re being melodramatic?” Roman asked, slightly amused.  “You said she’s grown now.  I would think the realities of life would calm her.”
“That’s the problem.  I haven’t exposed her to any of those realities.” Richard shook his head then sighed.  “Ever since her mother died when she was six I’ve been spoiling Serena, letting her have her own way.  Trying to make up for the loss of her mother, I guess.”  His eyes took on a distant look and his voice trailed away.
"But you went overboard?” Roman prompted.
Richard grimaced.  “I let her run wild for years. I thought with the supervision of the housekeeper she would be all right.  After all, girls are supposed to be easier to raise than boys, right?  Guess I was wrong.”  Richard smiled ruefully.  He reached into his breast pocket and pulled out a brown leather wallet from which he took a small photograph.  He slid it across the table.  “This is my Serena when she was nineteen.”  He shrugged.  "It's a couple of years old."

AMAZON:  Tamed by the Billionaire

APPLE:     Tamed by the Billionaire

BARNES & NOBLE:  Tamed by the Billionaire

GOOGLE:  Tamed by the Billionaire