TRADING PLACES - Here for the Holidays! 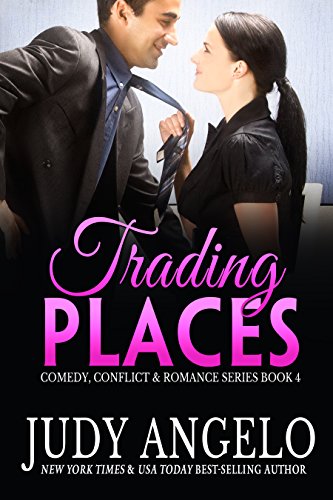 Neesha Marlowe has never believed in magic…until the morning she wakes up to find herself in a situation she could never have imagined in a million years.  She’s switched bodies…with a man who annoys the heck out of her!

Neesha would never have believed something like this could actually happen – falling victim to a magic spell that ripped her out of her body and deposited her in the body of a man?  Impossible!
But maybe not so impossible…not when she is waking each morning to shave a stubbly beard, dealing with male hormones shooting through a body that keeps threatening to betray her…with a most private body part that refuses to lay low.  And the worst part?  This traitorous body within which she is trapped is determined to betray her by falling in love with that one consummate male chauvinist who has stolen, not just her body, but also her heart.

Dean Craine has never met a woman who needles him so darned much.  Neesha is a trip, a co-worker he can gladly do without.  And he let her know that, in no uncertain terms.  But then, to his horror, he ends up living the life of Neesha Marlowe…the life of a woman!  The victim of an unbelievable, incredible, other-worldly body switch, he must now fend for himself in the mysterious world of women.  And it doesn’t help that, at a time when he can do nothing about it, he’s falling for the woman who, for more than a year, has been working his last nerve.  How can he declare his love when he is the polar opposite of what he should be – a man, for Christ’s sake!
Mystical mayhem, conquered only by love…

Click to get your copy, only $0.99, available, free, on Kindle Unlimited: